Air Conditioners by design cool the internal air. They take the internal air in a room and cool it down to the temperature set on the thermostat. They also remove the moisture from the air and make it dry. So all in all, the same dry air keeps getting circulated in the room. There is no option to get fresh air from outside while using air conditioner.

Whereas in case of Air Coolers, fresh outside air is taken, cooled and pushed in the room. Fresh air is taken from outside and passed through an evaporative pad containing water. The hot dry air cools down when it comes in contact with water on the evaporative pad. Although there is no option to control the temperature in air coolers, but it always supplies fresh air. 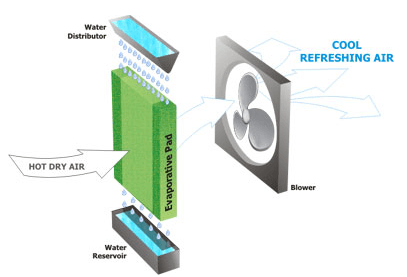 If going green is something that you are concerned about, then Air Coolers are the best option for you. Air Coolers use water as refrigerant, whereas Air Conditioners use CFCs or Chloroflurocarbons that are harmful for environment. Although plans are being made to phase out use of CFCs as refrigerants, but implementation of the same will take time. The easiest way to be green is to use Air Coolers.

Even if we consider carbon emissions for generating electricity, use of Air Coolers turns out to be a greener option because it uses 80-90% less electricity as compared to Air Conditioners.

If you live in an area that is hot and dry, air cooler is the best option. It not only helps reduce electricity bills, but also helps improve the air quality in a room. And on top of that it is the greenest option available to you to opt for.