With advent of digital television and high definition broadcast, television set top boxes have become quite common in houses today. More and more people are going for DTH services and even the cable operators have started providing digital transmission through set top box. In fact in the metros the set top boxes have become mandatory. But rarely do people understand the power consumption of set top box before using it. And because it takes time to start up (just like a computer), many people keep it on throughout the day. Without realizing, people increase their electricity bill significantly by wasting electricity on standby power for the set top box.

There is not enough research done on this in India. But study done by NRDC (Natural Resources Defence Council) suggests that high end set top boxes with HD and DVRs can consume a lot of electricity if they are not switched off from the plug point. Even in the standby mode, these devices consume electricity even when the consumer is neither watching a show nor recording it.

It is observed that the power consumption of set top boxes is almost the same when in use and when not in use (if left switched on) thus resulting in leakage of electricity. Although it may seem inconvenient as it takes time to start up, but if electricity saving is your priority, then it is better that it is turned off from the power point when not in use. 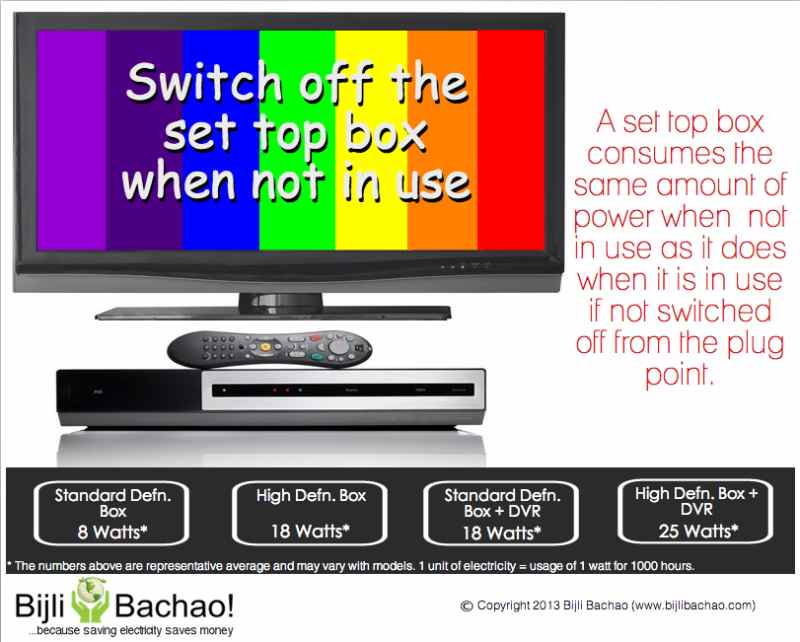