In a tropical country like India, rising temperature keeps making a bolder headline by breaking records of the previous seasons. You would have surely experienced the scorching heat of the Aprils and the Mays every year. Fan becomes indispensable for Indian households; especially the ones who cannot afford an AC. A good performing fan is a must if you want to avoid the sweat rolling over your face during the peak summers. Orient is one of the reliable brands you can trust, for virtually cooling your room through a good ceiling fan. Orient Electric which offers Orient fans, is a part of revered CK Birla Group. Orient Electric is one of the leading consumer electrical brands in India which offers a wide range of household electrical appliances and devices like lights, fans, and switchgears.

Orient Electric is the amongst the top-3 players of the fan market in India with over 20% market share. It is the largest exporter of fans from India with more than 60% share in exports. The global presence of Orient fans is impressive with a presence in more than 35 countries across the globe. Even in the domestic Indian market, it has a strong distribution network driven by over 3500 dealers, 1,00,000 retail outlets, and a service centers in more than 300 cities. When it comes to fans, Orient Electric offers the complete gamut of fans—from tables fans to ceiling fans, from wall fans to stand fans, from exhaust fans to multi-utility fans. Moreover, it has more than 60 years of experience in manufacturing household fans which gives it the edge over most of its competitors. In this article, we will cover chief features and technologies that the latest Orient fans come with.

One of the striking features of the new Aero series fans from Orient is the seamless monolithic design rendering the fan a sleek and futuristic look. Unlike an ordinary ceiling fan design, mostly involving central rotor hub housing a motor distinctly attached to the discrete fan blades, the Aero series fans come with a seamless fusing of the motor housing and the blades so that there are no visible joints and ugly exposed screws. Besides improving the aesthetics, this design philosophy also increases the surface area of the blades to improve the airflow. The chrome ring at the center (for selected models) is a cherry on the cake. White polyurethane (PU) paint over the blade and the rotor gives the fan a very rich and premium look. Orient fans are the vanguard of styling with their curvaceous silhouette and high gloss premium PU finish.

Before I explain Aerofoil design let me give a short anecdote. In the 70’s Lotus F1 team took Formula One world by storm by its unsurmountable dominance in every race of the season. Their incessant victories raised quite a few eyebrows and foul play was suspected. As a result, FIA, a regulatory body for racing sport sent officers to assess the reason behind Lotus F1 infallibility. As it turned out, they use aerodynamics and more specifically venturi effect that allowed their F1 cars to achieve speed which other cars could not. No doubt aerodynamics is one of the wonders of engineering and combined with jet engines it has changed the course of history by making air travel cheaper. Premium models from the modern Aero series harness the power of aerodynamics through its Aerofoil design with Winglet technology inspired from an airplane blade design. Just like airplane wingtip that prohibits the high-pressure area to come over the low-pressure area creating a giant wingtip vortex, winglet from premium Aero series fans reduces the strength of such a vortex, thereby mitigating the drag and improving the lift. This unique winglet design allows the premium models like Aerostorm to deliver the highest airflow (300 cmm) with minimal noise. 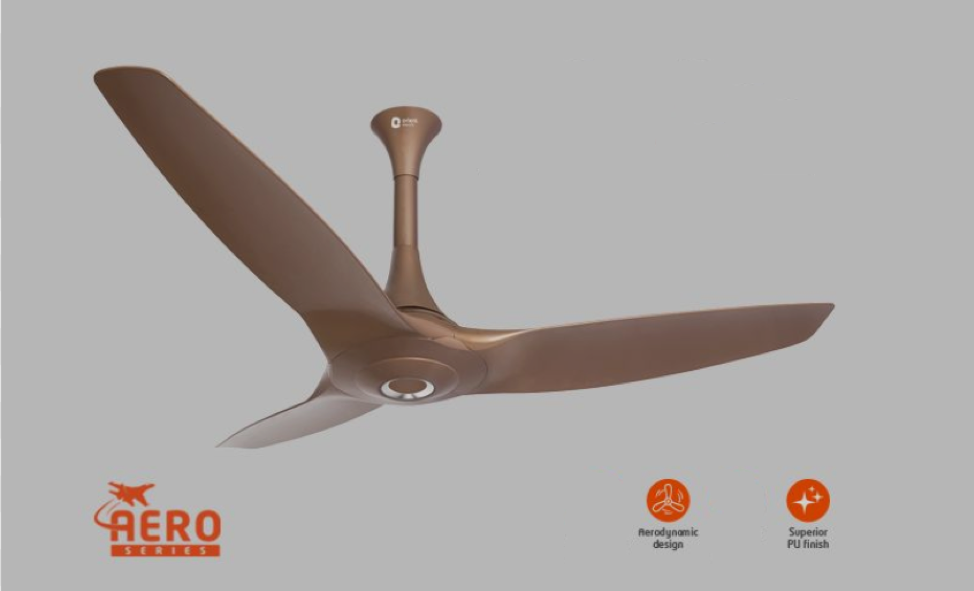 Inverters are a rage to save energy especially in heavy household appliances like ACs and refrigerators. But fan being an apparently small appliance with seeming frugal power consumption is often ignored for its energy consumption. But in reality, they are often more than one in quantity and run most of the time during the day, unlike the lights which run mostly during the evening. To mitigate energy consumption in ceiling fans, there have been a push by startups like Versa Drives and Atomberg Technologies which comes with BLDC (Brushless DC Motor) fans capable of reducing the power consumption by two thirds. A big company like Orient have been quick in catching up with the changing needs of the fan industry. They also offer energy-efficient BLDC fans through AeroBLDC series.

So lets now go into more technical details of BLDC technology. The traditional fan uses an induction motor and typically consumes 70-90 watts. But BLDC fan from Orient on the other hand, can reduce power consumption by up to 60%. The latest line up of BLDC fans from Orient consumes just 35 watts of energy. So, before we delve more deeper into the technical details of BLDC technology, let us first understand how conventional induction motor used in ordinary fans work.

Now, an induction fan has coils on both stator and rotor. When an electric current is passed through the stator winding electric flux is generated. Based on the arrangement of the stator, current flow accordingly. And upon the flow of current through coil motor rotates due to the induced electro-magnetic field (EMF). To control the speed of the fan, the speed of this motor needs to be controlled which is done by changing the resistance and thereby the voltage. This regulation is inefficient because a lot of energy is wasted in the form of heat.

A BLDC fan, on the other hand, works on direct current (DC) instead of alternating current (AC). This is done by internally converting the AC voltage to DC voltage using switch mode power supply (SMPS). The main difference between BLDC-based fans and conventional fans is in the commutation method. Commutation is a technique of reversing the direction of current in the motor for the rotational movement. By a virtue of its structure, BLDC motor doesn’t come with any brushes. So, the commutation is done by the algorithm (smart software) which drives the internal electronics inside the fan. Commutators in case of ordinary induction motor undergo wear and tear over time due to mechanical contact with brushes. But this shortcoming is eliminated when a BLDC motor is used. So, BLDC fans are designed to last longer thanks to its brushless design.

Premium models from Orient come with a sturdy 18-pole heavy motor with double ball bearing for the smooth operation of the ceiling fan. Moreover, they are made with 100% rust-free blade which eliminates the risk of rusting. High-grade glass filled compounded ABS is used in the fan blades which provides it the adequate strength to ensure high airflow. This meticulously designed fans in the premium series like Aeroquiet makes them one of the quietest fans in the market.

Pros and Cons of Orient Fans

One of the strongest points which go in favor of Orient fans is its brand image. Orient is one of the trusted ceiling fans brand with an enormous six decades of experience in dealing with all variety of fans. In fact, Orient Electric was conferred with Superbrand status last year. Even government of India have acknowledged the efforts of Orient Electric through National Energy and Conservation Awards in 2016. Interestingly it also holds Limca Book of Records for manufacturing 50+ lakhs of fans in a financial year through its Faridabad plant. High-end model from Aero series comes with the highest airflow of 300 cmm. Aeroquiet series fans from Orient are one of the quietest fans in the market. Aerofoil design with winglet technology is the main USP (unique selling proposition) of the premium Orient fans.

Talking about cons, it would be in their pricing. Being a renowned brand, you need to shell out more money to own an Orient fan. In fact, the company’s plan is to project itself as a premium fan brand. So, they are more focused on capturing the market with big pockets. Even the BLDC fans from Orient are very expensive as result as compared to Superfans or Gorilla fans. Also, the power consumption of Orient BLDC fan is slightly on a higher side. There have been some complaints about fan wobbling and not being in perfect balance at the center for a few models. But it’s difficult to say if its fault with the model or fitting by an electrician.

Overall, Orient Electric is a pretty solid brand with a diversified portfolio of fans. But to get the best out of Orient fans you need to select the right series and the right model. Rust-free design with PU finish imparts the fan a vibrant look and ensures long life. Aerodynamic design with airplane-like winglet is an eye-catching innovation and helps in better circulation of air in the room. Orient Electric seems to have redefined the ceiling fan technology by infusing its age-old electromechanical underpinnings with the power of aerodynamics to achieve the holy trinity of enhanced performance (airflow), silent operation, and high efficiency.