Godrej was the first company to introduce refrigerators in India in 1958. Godrej is easily the best Indian brand when it comes to refrigerators. Godrej appliances are a part of reputed Godrej group which is in business for more than 120 years. With the unmatched experience, it offers good series of refrigerators with single door one’s beings its forte. Though Godrej was once a market leader, liberalization of economy and entry of global players like Samsung, LG, Whirlpool etc stiffen the competition and changed the market share dynamics. Over the years Godrej has worked hard to reclaim the lost ground to foreign players and is now one of the preferred desi brands. This revival has been made possible by establishment refrigeration plants in Shirwal and Mohali and then increasing its capacity. The result is its growth in double digits with a market share of exceeding 15%. Talking about categorization, Godrej offers three types of refrigerators: 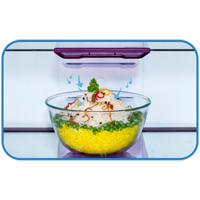 Some single door DirectCool Godrej refrigerators come with an interesting feature and that’s Muziplay music player. Yes you heard it right a music player which can play music from USB storage on a loud 80W PMPO speakers! In fact it even has FM player so you listen to the FM station you like when you don’t have pen drive to play songs from. So cooking in kitchen can now be fun with your favorite music running on the refrigerator. And the thing which I personally liked the most was the USB port doubles up as mobile charger, easily allowing your smartphone to charge as well. 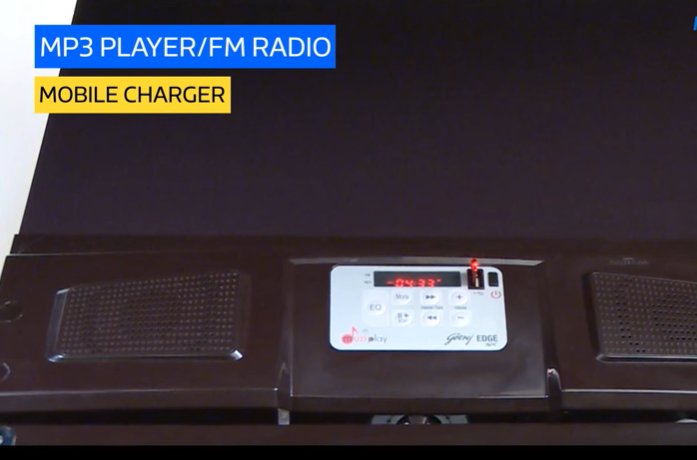 Single door Edge series comes with a Turbo Chill mode which when enabled, quickly chills the stored item inside the refrigerator. This feature would be a boon for the users who need to serve guests usually coming on a short notice. Godrej believes Turbo Chill empowers the refrigerator to deliver 50% faster cooling than the conventional direct cool refrigerators.

True that different zones help to maintain a different set of temperature for optimal cooling but what if you keep regularly opening the fridge intermittently? Will the surrounding heat disturb the balanced temperature inside? No. Thanks to its smart air lock system which deftly minimizes the cooling loss even if the door is being open intermittently. 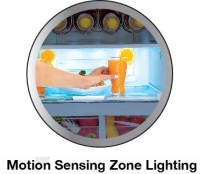 The flagship NXW series comes with innovative motion sensing lights that can detect any movement. Based upon on the detected action, it illuminates the area where the user is looking for food or trying to arrange the food items.

Eon series of Godrej refrigerators come with large vegetable tray wherein you stuff your fruits and veggies as heavy as 34 Kgs. While the high-end NXW series comes with innovative flexi freeze tray which can extend vertically easing the space management inside the refrigerator. They also come with detachable storing trays which can be even used as serving trays. Similarly, there are removable bins in the door to store items like dry fruits, chocolates etc.

Agree, Godrej offers lots of space and customization options using variegated trays, shelves, and racks but are they durable? Well, the answer is yes; thanks to the usage of toughened glass. Toughened glass shelves are capable of bearing extra load without breakdown. This toughened glass shelf comes with a solid border that prevents seeping of liquid from the shelf in case of a liquid spill. Godrej’s Edge series refrigerators can hold  up to 150 Kg of load.

Silver Ions and Anti-B Keeps the Bacteria at Bay

The gasket of modern Godrej refrigerators comes with Anti-B technology which preserves the hygiene of the stored food by decimating the dwelling bacteria. It is removable too; meaning users can easily clean it if the need arises. Thus, the gasket seals the freshness by prohibiting the entrance and accumulation of bacteria, that could blight the stored food inside the refrigerator.

Due to tropical nature of Indian climate, rusting of the refrigerator is a major concern for the Indian consumers. Factors like salinity, industrial pollution, and temperature variation further aggravate rusting predicament. Now, the chances of food contamination increase due to corrosion. So, to savage refrigerators from rust and food from contamination Godrej has come up with Zinc Oxide Protection (ZOP) technology. Refrigerators protected with ZOP technology are made of 100% galvanized steel as opposed to cold rolled steel. Besides the protection from rusting, usage of galvanized steel increases the life expectancy even in the severe urban environment.

Modern Godrej refrigerators come with intelligent automated defrosting which considers important parameters like previous defrost time, ambient temperature, the frequency of door opening, frost accumulation etc. This ensures optimal defrosting. If a user wants to override this inbuilt automation and wants to further customize his refrigerator then NXW series offer digital touch control panel which is mounted on the front. This touch panel display allows the user to customize the temperature for each shelf, change modes, etc without needing to open the door. There is an Intelligent mode, which when enabled, brings down the refrigerator temperature by 2oC before defrosting in order to avoid potential thermal shock which occurs due to defrosting.

Power cuts and load shedding is commonplace in India, especially in distant towns and villages. Since refrigeration generally works 24×7, it is a home appliance most susceptible to the erratic blackouts. Power cuts poise two problems for the refrigerator. First is the spoilage of food in case if power cuts persist for a longer duration of time. Second is much more hazardous—damage to the refrigerator due to voltage fluctuations. Godrej’s new refrigerators are well-equipped to handle this crisis. It comes with a good cooling retention plan, courtesy—StayCool technology.

Refrigerator with StayCool technology comes with a cooling gel located in the freezer on both sides. This cooling gel keeps the food well frozen for few hours without power, and keep the freezer compartment cold even in the absence of electricity. This means even ice cream kept inside the refrigerator won’t melt for few hours in case of blackouts.

Another problem with power cut is discharge and mixing of a foul odor inside the refrigerator. The latest line up of Godrej refrigerators comes with Aroma Lock and Carbon Palladium deodorizer that filters out foul odor and removes ethylene trapped in the refrigerator emitted from rancid food items. 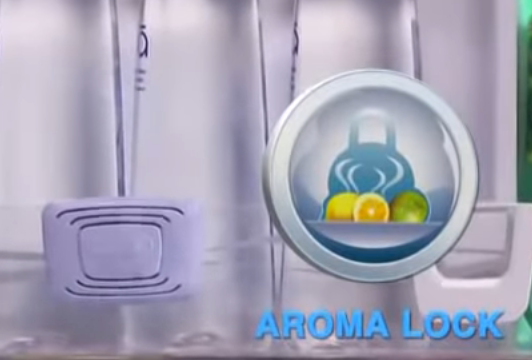 Premium models from Eon series comes with Fresh Shield Crisper technology that keeps fruits and vegetables fresh for longer by retaining the mositure. Thus, with StayCool and Fresh Shield Crisper  ensures food remains fresh and chilled for several hours during blackouts, while the deodorizer represses the fetidity of rotten food.

Compressors in the lower-end/primitive refrigerators come with single speed motor. They are either “on” or “off” based on the temperature in the refrigerator. Such compressors are designed to work incessantly at the peak load conditions (for high temperatures in summers), which means that they run at peak load even in winters when the cooling requirement is less. This is where trusted brands like Godrej manifest smartness. New models from Eon series come with Nutrifresh Inverter Compressor that continuously run at a variable speed based on the input from the  sensor arrangement.

Working of the compressor with inverter technology is analogous to the car accelerator. When the speed required is more, the acceleration is more, and when it is less, and then the acceleration is less. This makes sure that during the summer season when the cooling load is more, the compressor works at the peak capacity taking more electricity. But during winters when the cooling load is less, the compressor runs at the lower speed thereby consuming less electricity. Even during summers, the night temperature is less than the day temperature. Thus, electricity is saved even during the late evenings when compressor can run at a lesser speed. The Nutrifresh Inverter technology from Godrej not only results in cost savings but also emits less noise and mitigates the carbon footprint.

Being the oldest refrigerator company in India, Godrej offers good quality of refrigerators. Just like other brands, it has its own hits and misses. One of the biggest miss from Godrej is the unavailability of premium French or multi-door refrigerators which all other big brands offer. Though they have embarked on premium refrigerator segment by launching NXW series it needs to bring French door models to cater high-end customers. The inbuilt water dispenser is something we missed with Godrej refrigerators as well. Though many of the new models come with the stabilizer-free operation, minimum starting voltage of 140V is much less compared to other brands like Whirlpool, LG, and Samsung.

Godrej is one of the dominant players when it comes to single door refrigerators. Thanks to its Cool Shower technology which imparts thorough and uniform cooling throughout the refrigerator. While usage of good insulation material and air lock system ensures that the ambient heat does not creep inside the refrigerator. Godrej refrigerators are least prone to corrosion, thanks to its heavy investment in the usage of ZOP technology. Consumers dwelling in the area where power cuts are common, can feel safe after buying Godrej refrigerator for it comes with a solid power-cut backup plan in the form of StayCool technology, aroma lock, and stabilizer free operation. So, if you are someone who is looking for an Indian brand of refrigerator and have a tight budget but want a refrigerator made up with good quality parts designed to last long and survive the vagaries of power cuts, you can consider Godrej.