OLED vs QLED: All You Need To Know About Premium TV Display Technologies

Gone are days when there used to be a rivalry between LCD and LED. Enter 2019 and you’ll see the biggest battle of OLED vs QLED when it comes to the premium display panel. You may wonder what exactly are OLED and QLED? Which one is better? Well, we’ll answer all you pertaining queries to this in this article. And after reading this article, you’ll be confident when the salesperson throws his sales pitch laden with acronyms regarding the display technology and more importantly make a better decision of purchasing the right television.

Battle of OLED vs QLED signifies rivalry of two Korean giants who used this acronym to describe their TVs as the best in business. But QLED and OLED are technically different—it’s just like comparing apples and oranges.

A few decades back when you bought TV or PC, screen size used to be big and the device itself was bulky because of the usage of then, contemporary CRT technology. Introduction of LCD screens helped in significantly trimming down the screen thickness. Then improving on the technology of LCD, came LED screens which were slimmer and more energy-efficient. Interestingly, LEDs are not fundamentally different from LCDs. They use LCD panel but have a LED backlighting instead of cathode backlighting.

But in the last few years, two new technologies are challenging the relevance of LED TV, especially in the premium segment big size television. So, let’s look into these two technologies one by one and then do an in-depth comparison.

QLED stands for quantum-dot LED. Quantum dots are microscopic particles. These microscopic particles upon reception of ordinary light emit their own light, albeit differently coloured. In TVs coming with QLED technology, the quantum dots are contained in a film and the light that hits them is generated by the sheet of LED backlight. Light generated travels few other layers inside the television including the final LCD layer to display picture/scene. The light from the LED backlight is transmitted through different layers ultimately onto the screen surface and that’s why QLED is called transmissive type display.

Samsung is the pioneer of quantum dot display technology and in fact, it’s almost since 2015 that it is using quantum dots to augment its LCD TVs. It used to call it SUHD. But 2017 onwards Samsung has rebranded this technology to its presently popular form, “QLED”. 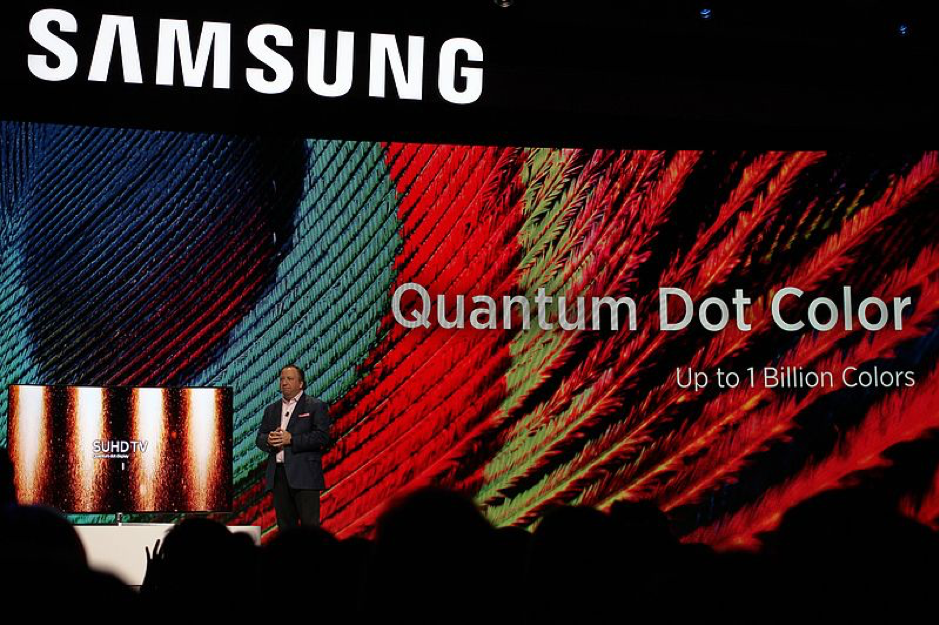 As many tech geeks have rightly insinuated that this name sounds very similar to OLED—a technology offered by archival LG in its flagship televisions. Samsung claims that these quantum dots have evolved quite a lot over time. They profess that the colour reproduction and general output from the television on account of new quantum dots have improved tremendously. But in our research and testing, we found that the improvements resulted on account of QLED display are little less evident for the lay user, but it has certainly improved image quality. And if you migrate from ordinary LED TV to QLED you’ll surely be pleased.

Besides Samsung, TCL and Vizio are the other two brands that offer QLED technology. But it’s the Samsung who supplies them with QLED display panels. LG also has Nano Cell Display technology which is quite similar to Samsung’s QLED.

OLED stands for organic light emitting diode—a display technology introduced by LG which consist of specialized panel capable of emitting its own light when an electric current is passed through it. 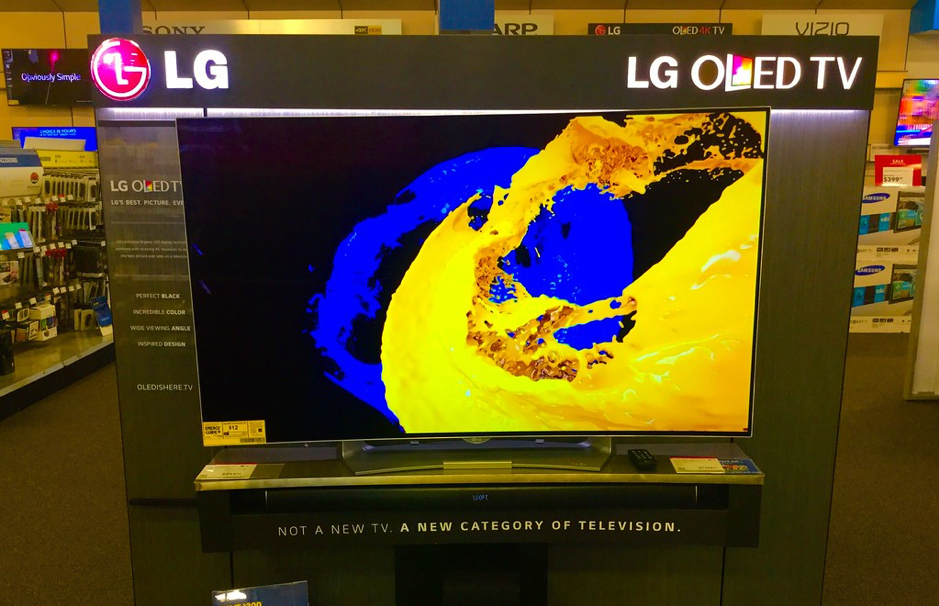 In fact, the difference between OLED and QLED can be best summarised as follows: QLED is a tweaked version of existing display technology whereas OLED is fundamentally different display technology. How’s OLED different you may ask. Well, primarily because it doesn’t use an LED backlight to generate light. Alternately light is produced by millions of individual OLED subpixels. The pixels that compose the image are capable of emitting light themselves instead of relying on LED backlighting. That’s why OLED technology is referred to as emissive display technology as opposed to transmissive QLED technology. Self-light reproducing capability translates into vastly improved picture quality, wide colour gamut (WCG), deep colour saturation, and wide viewing angle.

Aside from LG, Sony, Panasonic, and Philips are some other popular TV brands that sell OLED televisions. But just like Samsung manufactures QLED panels even for other brands, it’s LG that supplies OLED display to other TV manufacturers.

OLED vs QLED: An In-depth Comparison

Based on our extensive research, we have listed the key differences between the two technologies along with their pros and cons.

The picture quality varies widely among different QLED models. Samsung alone offers QLED in more than 20 models. The most expensive of the lot perform much better than the cheaper ones. And contrary to the intuition, these improvements in picture quality isn’t due to the improvement in just quantum dot technology. It has more to with usage of full-array local dimming which has resulted in brighter highlights and better viewing angles.

OLED TVs, on the other hand, are much more consistent with their picture quality—which is simply stunning. Variation among models is minimal and would be practically unnoticeable for a lay user.

OLED has the Best Contrast

One of the most key factors which decide the image quality is the black level. Thanks to the emissive nature of organic diodes used in OLED, they can completely turn off unused pixels for theoretically delivering infinite contrast. Yes, you heard it right infinite contrast! OLED offers the best contrast you can find on any display and that cannot be matched by QLED which rather relies on local dimming technologies for that. Even with the state-of-the-art full-array local dimming pure blacks cannot be achieved by QLED which are so perfectly displayed on OLED displays.

One of the biggest advantages of QLED over OLED is that they can generate brighter pictures. This becomes highly advantageous in the room where TV setup is such that direct sunlight comes onto the TV and spoils the viewing experience. With the bright QLED TVs watching HDR content becomes even more immersive experience. Though OLEDs are brighter than LED TVs but cannot match brightness levels of QLED TVs.

When it comes to OLED technology, you’ll mostly find TVs with a screen size of 55’ or 65’. You’ll need to shell out a few lakhs to own an OLED TV. The sole maker of an OLED panel, LG Display, just can’t produce enough OLED panels, quick enough to drive the cost lower using economy of scale. This is why OLEDs presently are super expensive and come with a big screen size only. QLEDs, on the other hand, are relatively reasonable and offers QLED technology from 43’ screen size onwards all the way upto mammoth 98’. And its relatively easier to produce smaller size QLED than an OLED.

OLED Are More Susceptible to Burn in

Screen burn-in, also called ghosting, refers to discolouration of areas on a TV display usually caused by the incessant use of the same pixels. This typically happens when a persistent part of the image such as channel logo, news ticker remains on screen for a few days without break. Like for example if you run Star Sports on a TV and keep it running for few days without changing channels or shutting off the TV, the logo of Star Sports may get imprinted on the screen which would be visible even when you switch channels or turn off the television. In case, you go for OLED and don’t keep the TV switched ON continuously for long and on the same channel so that the logo does not imprint on the TV screen.  Theoretically, all TV screens can suffer from screen burn but OLEDs are observed to be much more susceptible to this phenomenon.

MicroLED: The Future of OLED and QLED

If you want best of picture quality, then OLED TV by LG would certainly make a better choice. But hold on, Samsung is working on it’s QLED to beat OLED in the future. It is working on a newer version of QLED that has “emissive technology” just like plasma and OLEDs. Technically called direct-view quantum dot, it dispenses with the liquid crystal layers and makes use of quantum dots as a source of light. This emissive QLEDs would be able to catch up with absolute blacks of OLED and achieve infinite contrast too. But if sources are to be believe it would take a couple of years for it to come out for general consumers. Maybe we’ll have another acronym like EQLEDs perhaps by then!

Side by side Samsung is working on another emissive display technology called MicroLED which would be slated to be out in market much before “EQLED”. MicroLED would be using millions of tiny LEDs as pixels. MicroLED would be able to deliver perfect blacks with no risk of burn-in. So, let’s wait and see how these two technologies would perform against the contemporary premium display tech dominated by OLED and QLED.

Though it is some time before we get fundamentally new display technology which Samsung is working, presently we have OLEDs and QLEDs which are at the pinnacle of display technology. Sure, they would be challenged by the technology of the future, but we’ll have to wait till then. Right now, if you have to choose between the two, OLED would be the best choice assuming you have no budget constraints and don’t have a TV set up such that a lot of sunlight comes directly onto the television. On the other hand, if the risk of burn-in makes you wary and you hanker for the display which is brightest but not nitty picky about the contrast ratio you can go for QLED.