Surge protector: What are they? What to look for while buying one?

Many people complain that their television or electronic appliance got “burnt” as the voltage shot up suddenly. By saying “burnt” they obviously don’t mean that it was caught up in flames, but they refer to a very common phenomenon of an appliance becoming non-functional all of a sudden due to a drastic fluctuation in the incoming voltage. When the voltage increases abruptly to a very high value for a very short span of time, it is referred to as voltage surges.

Voltage Spike: What and How?

The standard distribution of electricity in India in single phase is done in 230 Volts and for three phase connections, it is 415 Volts. However both in single phase and three phase connections, the individual plug point provides 230 V. However sometimes it happens that the voltage of the connection drastically increases to a very high value suddenly for a very short period of time (for a few nanoseconds). This phenomenon is called a voltage spike. This in turn leads to a corresponding increase in the current, which is called a current spike. It endangers the appliances which are drawing current from the mains at the time of such an abrupt increase. (Refer to our article “Impact of Voltage Fluctuations on appliances and their electricity consumption.” for a detailed explanation)

A voltage spike may be caused due to a number of reasons. It may be due to short-circuits, striking of lightning, power outages or sometimes due to a malfunction in the electricity provider.

What can I do to protect my appliances against voltage surges?

As the name clearly suggests, a surge protector is a device that protects or shields your appliances against a voltage surge/ voltage spike (consequently a current spike). A lot of people use surge protectors to provide power supply to desktop computers, television etc. When the voltage increases beyond a certain level, the surge protector either blocks or transfers the excess energy to the ground. By doing this, it ensures that the appliances connected to it do not get affected or broken down due to a voltage surge. 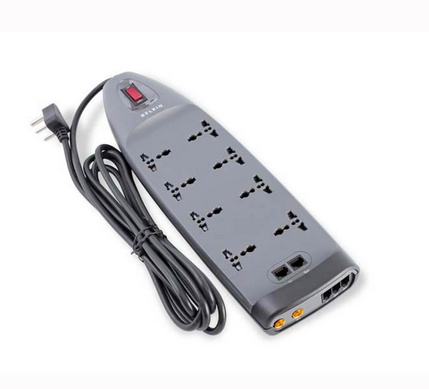 What to look for while buying a surge protector?

There are a few things which you should take in mind while selecting a surge protector for your appliances:

There are many brands which are coming up with different models of surge protectors which have different technical specifications. So it is advised that you should first thoroughly understand what your requirements are before buying a surge protector. Belkin and GM are popular brands currently available in market.

Voltage surge is a phenomenon which you can do nothing to prevent from occurring. This is because the reasons which cause a voltage surge (like striking of lightning, a short circuit etc.) are beyond your control. So it is best to opt for a solution which protect your appliances from voltage surges. A surge protector does just the same. Before buying a surge protector, it is important to understand what your requirements are as it would facilitate better judgment in this regard.