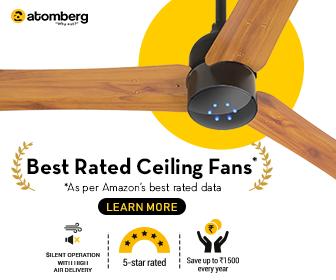 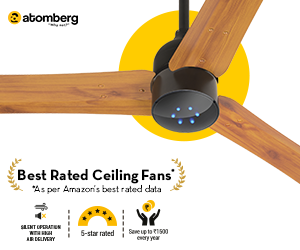 A few handpicked ones include:

Please note that the list below is based purely on electricity saving potential data from Bureau of Energy Efficiency and it does not include brand value of the model (as brand value is more subjective than objective). We would recommend that you go for a model that is from a brand that is known to you.

The basis of this ranking:

Ceiling fans can be great electricity savers during summer months if your electricity bills are high due to high air conditioning load. There is significant amount of electricity that this small appliance can save and can help you avoid air conditioner. But it is not a magic wand to save electricity. It is very important to have a right kind of ceiling fan installed with its right maintenance and operations. A poorly installed fan of bad quality can waste a lot of electricity.

Ceiling fans do not change space air temperature; instead, they move the air around to change the thermal sensation of the occupants of the room. Fans move the air around the human body or the occupants in the room and the air takes off the heat surrounding the human body. It also helps in evaporation of the sweat which makes a human feel cooler. This makes a human feel 2 to 4 degree centigrade cooler. With very less electricity consumption (or fewer units consumed in electricity bill), a ceiling fan can give good comfort in warm and particularly in humid climates.

The electricity saving and efficiency of a ceiling fan depend a lot on the type of fan selected and proper installation. It is very important to make sure that you read the instructions by the manufacturer before you buy a ceiling fan. There are few things that one needs to check before installing a fan:

1) Size: Ceiling fans come in various sizes from 900 mm to 1400 mm with 1200 mm size being the most common. Below table specifies the ideal size of a fan for various room sizes:

If the rooms are bigger it is better to install multiple ceiling fans.

2) Blade Pitch: A flat blade just slices through the air and does not assist air movement, so it is important that a blade of a ceiling fan is tilted at least 12 to 15 degrees. The angle assists air movement. It is also important to note that if pitch increases beyond 12-15 degree, the efficiency of motor running the fan decreases thus increasing electricity bills and the airflow not directed towards the intended direction.

3) Technology: Modern BLDC technology is highly energy efficient and can save a lot of electricity. If you have a fan that is used a lot during the day then buying a BLDC fan will be really good. If a fan is not used a lot then going for a regular technology is fine.

4) Comfort, Regulators & Remote Controls: These days you can get ceiling fans that can be operated using remote control or SMART home devices. Electronic regulators can give a lot of problems in operation and thus going for such fans can help you avoid those problems. It is also quite comfortable to operate fans using a remote control.

5) Looks and anti-Dust: If you are looking for a ceiling fan for your living room, then you can get a lot of decorative options in the market. Some of them even have paints that do not catch dust. They are a bit expensive as compared to other options.

BEE (Bureau of Energy Efficiency) launched a star rating scheme for ceiling fans in the year 2006. Till 2019 the star rating was not mandatory for ceiling fans, but in 2020 it will become mandatory for all ceiling fans. Visit our post about BEE star rating to have a better understanding of the star ratings. The rating is given on basis of an indicator called “Service Value” which is the ratio of air delivery (in cu.m/min) to the power input. Greater the service value, higher is the efficiency. We at Bijli Bachao received some feedback that BEE higher star rated ceiling fans do not give good air, so we would like to suggest that one should look at higher service value along with higher air delivery to select appropriate ceiling fan. It is also important to note that the star rating changes every year as technology improves. So a five star rated fan in 2006 may not be as efficient as five star rated fan in 2011, so it is important to note the service value and air delivery as well. Typically inefficient fans are of about 80 watts and efficient ones are of about 45 watts, thus switching to efficient one can save about 45% electricity.

Care should also be taken while installing ceiling fans. It should be installed at least 3.0 meters above the floor and there should be around 9-12 inches space between the blade and the ceiling. In super hot regions where the roof gets really hot, the space should perhaps be more (12–18 inches) or else the fan will push down the hot air. If the space is not proper, the air delivery will not be right. Care should especially be taken when putting ceiling fans on false ceilings. Make sure that there is enough space between the blades and false ceilings. In case the ceilings are very high, extended down rod for mounts should be used.

Proper care should also be taken in upkeep of the ceiling fans. Following things should be made sure:

1) Ceiling fans are generally maintenance using sealed bearing.  It is a fit and forgets appliance and one should not bother about any requirement of maintenance except cleaning of the blades and sometimes the canopy gets loose and makes a sound.

2) If the fan is vibrating or is making too much noise then it is likely to be a mounting problem and check for the mounting after removing the canopy. Continued running of the fan in this condition can be unsafe.

3) Never interchange blades of the ceiling fans as the manufacturers ship the product after balancing the blades for right operation. Interchanging blades may reduce the efficiency of the fan and may also result in bobbling.

4) Nowadays electronic regulators are used in which the voltage is varied resulting in the reduced speed of the fan. As per the feedback received from many of our readers, the electronic regulators does not work reliably and of sudden stops varying the speed. Since the cost of the regulator is not very high, one can keep 2-3 regulator spare in his house and get it replaced when such problems are observed. Electronic regulator results in saving of energy at lower speed by around 25% as compared to old rheostatic regulators.

5) Decorative fans have been developed by many manufacturers which are only for decorative purpose and does not have any value except few with anti-rust, anti-dust protective coating etc. which improves the life. The choice of such a fan is based on the taste of the individual.

5) The fan technology is continuously advancing and the latest is the BLDC fan. These fans are also called super-efficient fans and most importantly controls the speed at a various speed very well. Since the cost of the super-efficient fan is on the higher side, one can decide to go for such fans in rooms which are used extensively.