The light-emitting diode (LED) Lights is environment friendly and more secure than fluorescent because it works at much lower temperatures. An incandescent bulb gives off more energy as heat rather than light, something to do with the resistance of a Tungsten filament, therefore LED is considered better than fluorescent even when the lumens per watts is the same. But is this the only reason, especially to answer that LED is a better option comparing on same lumens per watts?

But before we discuss this any further, let us look at this interesting table – The table below shows the amount of brightness in lumens one can expect from different wattage light bulbs. We can clearly see that the LED bulbs require much less wattage than the CFL or incandescent light bulbs, which is why LED bulbs are considered as more energy-efficient and long lasting than the other types of bulb.

Table 1 – Amount of brightness for different category of bulbs

Now, there is another chart which compares the lumens per Watt of different light appliances include LED and incandescent bulb (Linear Fluorescent). It is clear from the table that the LEDs use less power (watts) per unit of light generated (lumens).

Chart 1 – Lumens per Watts Vs. different category of bulbs 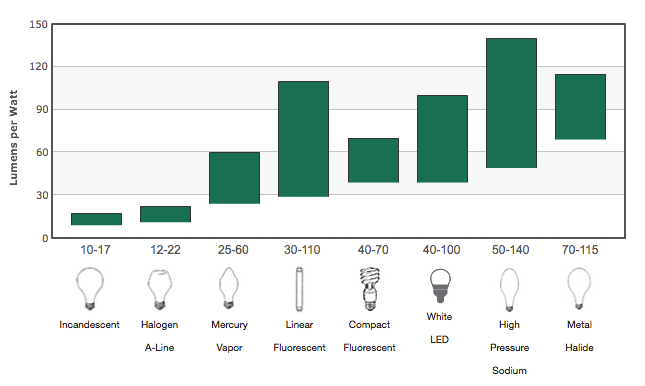 A LED is a semiconductor device that emits visible light when an electric current passes through it. Presently, the LED technology is advancing rapidly, with many new bulb styles available. Initially more expensive than other category of bulbs say the CFLs and of course the incandescent bulbs, LEDs bring more value since they last longer. Also, the price of LED bulbs is going down each year as the manufacturing technology continues to improve and the government is also providing subsidy to its sale.

Answering the main question posted at the top of the article

Now, coming to the main question posted at the top of the article – Why LED lights are better than Fluorescent lights even when lumens per watts are the same?

To answer this, we must understand that these LEDs provide a unidirectional flow of light (or emit light in a particular specific direction only) but the incandescent and CFLs emit light in all directions, they have a spread of 360 degree. Typical beam angles (or spread) for LEDs, available in the market are in the range of 15, 30, 45, 60 and 100 degree and for general illumination, it is 120 and 180 degree. In fact, the most common LEDs available for general illumination are with a beam angle of 120 degrees or more, and they can be treated as any other CFL lamps. Now the spread (we are also call them beam angle) is directorially proportional to division of light (lumens). More spread in case incandescent and CFLs will cause more division of lumens, and naturally causing less brightness. In incandescent and CFLs, the light with a much higher beam angle gets distributed. Thus, if our requirement is for spot lightening (a concentrated light for a limited space); more number of these bulbs will be required to be installed, requiring greater power. Therefore, LEDs being unidirectional will produce a lot of brightness compared with any type of fluorescent lights even though the lumens per watts are the same.

Other advantages of LEDs over fluorescent lights:

Even these days the government is also acknowledging such benefits. As per news report published in September 2015, the Indian union power minister, Mr. Piyush Goyal, announced “13.46 million bulbs have been distributed so far and the government has set the target of 700 million bulbs in the next two years and nine months”. We will cover the subsidy to the LED bulbs in great details, in some other article.

Some good LED Lights on Amazon