Why are we experiencing high electricity bills post Lockdown?

Expressing shock over high electricity bills is not uncommon. However, that is mostly the first reaction. The next thing that most people do is doubt the electricity distribution company. Making mistakes in electricity bill calculation is not uncommon, but rarely does it happen on a large scale. And unprecedented times are giving us unprecedented experiences. Post lockdown, we are receiving several complaints from people saying that their electricity bills are exorbitant. Even celebrities are complaining about the same on Twitter. Yes, indeed they are high, but let’s examine why we are in the current situation and what all you can analyze before putting a complaint with your electricity distribution company.

Why are we in this situation?

Now the Lockdown brought this process of meter reading to a grinding halt. And everything was thrown in disarray. Meter readings were not taken for months (March till Lockdown), and the bills were generated on average reading.

What is Average Reading?

The definition of average reading may vary from place to place. It can be average monthly consumption throughout the year (in the previous year), or it can be average of past few months, or it can be average of a specific month in the past few years. It is essential to ask your electricity distribution company on how they came up with the average. In Maharashtra (or specifically Mumbai where I live), the average used was average of the past 3 months. So, for the month of March, April and May, I was billed on average of December, January and February. It can be different if you are not in Maharashtra and before you start analyzing, please confirm with your distribution company on which months were used for calculation of average.

How does a month make a difference?

Your consumption of electricity varies throughout the year. Two of the most significant electricity consuming appliances in residence: Air Conditioners and Ceiling Fans are used a lot in summers and much less in winters. This results in higher electricity consumption in summers and lower in winters. Now in my case, the average was based on December, January and February, which are the lowest in terms of consumption. And my highest consumption is in April, May and June (months when I use ACs and Fan). What this resulted in was that I paid bills equivalent to December, January and February for March, April and May. This resulted in a big gap. All of which got added in June for which I got the bill (after the actual meter reading).

Did Lockdown have an impact?

It certainly did. In my house of 3 adults and 2 kids, 4 people usually used to be out of the house in a typical month of April and May. My wife and I would go to work, and my kids would go to school. All of this resulted in less electricity consumption at home for the 8-10 hours when we were out. But Lockdown got us all locked in the home with increasing consumption of ACs and Fans (which contribute a lot to electricity bills). What this resulted in increased units consumed for March, April, May and June in comparison to last year. For extra 8-10 hours, our electricity consumption increased by roughly 30% (however, it can vary depending on how much AC you use). 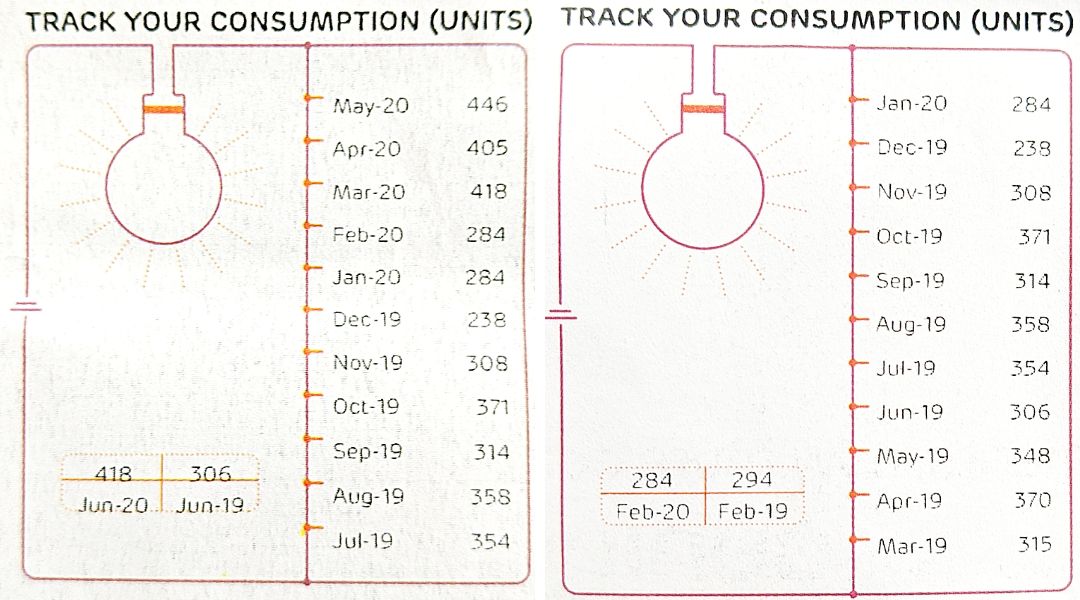 Shouldn’t we get relief because of COVID?

But I am not complaining, because due to Lockdown, I rarely travel to the office and my consumption of petrol/fuel has come down significantly. So, if I spend somewhere, I save somewhere.

Is there anything else that can impact my bills?

What can you do to analyze?

Here are a few steps that you can take to analyze your electricity bills and understand why they are high post lockdown:

What can you do if you have doubts on your electricity bills?

You have done the analysis as mentioned above, and you are still not okay with the calculation and want to complain? Well, the best way to do it is to first reach out to CGRF (or Custom Grievance Redressal Forum) at your electricity distribution company. By law, all electricity distribution companies have to have a CGRF, and they have to listen to your complaints. If they are not able to solve your problem, then you can reach out to the Ombudsman at your electricity regulatory commission. The state electricity regulatory commission is an independent (government) body. It does not have any financial interests with your distribution company. They should surely be able to give a fair judgement.

Lockdown has undoubtedly brought great pain to all of us. And electricity bills are adding on to that. But it is always good to do an analysis on our own before taking in all the extra negativity with others. We hope this post helps you do the same.