What are single phase and three phase connections and how to choose between the two?

What are single phase and three phase connections?

In India a single-phase supply is a 230V supply through two wires ( one called phase and another neutral) and 3-phase supply is 415 V supply through 4 wires and in the house, the line can be divided to give 230V (by selection any one phase and another neutral) at an individual point. The basic difference between the two is that a three-phase connection can handle heavy load while a single-phase cannot.

Similarly, consider single-phase as a single lane highway and three-phase as a multilane highway. There is a limit to the load that a single phase can handle and typically that number is set to 7.5 kW (or 7500 watts or 10 Horse Power) (but varies from state to state). So if the sum of wattage of all the appliances that you are running at a time is more than 7.5 kW, then you need a three-phase connection. And you can get to 7.5 kW if you have three 1.5 ton ACs and a water heater all running together. Or you have a machine that has a motor that is more than 10 HP. If the load is less than 7.5 kW, then a single-phase connection can easily handle it.

But I have a three-phase connection and my electricity distribution company assigned me that?

Are there any benefits of three-phase connection?

The benefit that a three-phase connection provides is that it gives the flexibility to divide the load in a setup into three different phases. So for example if there are three Air Conditioners, then each can be set up on each of the phases, thus not putting excess load on any one phase. In case one of the phases fails due to a fault at the distribution point, the other two phases keep running and this prevents complete blackout of the setup. So in your house, if you have three rooms connected to each phase, then even if one phase fails from the electricity distribution transformer, only one room will not have electricity, but the other two will continue running.

The places where the power supply had many load sheddings, connect inverter output to one phase for feeding the essential loads of the house and other phases carry the balance load of the house.

What are the extra charges associated with a three-phase connection

Typically it is observed that if the connected load in a house is more than 5-7 kW, electricity distribution companies put a three-phase connection in the house (to know more about connected load check this link: Impact of Connected Load on Fixed Charges in Electricity Bills). And obviously, as it offers extra load, there are charges associated with a three-phase connection. First and foremost, as the connected load provided to the house increases, so the fixed charges on the electrical connection may increase. Also, three-phase meters are different from single-phase meters, so the meter needs to be replaced. In some states, utilities have monthly meter rent, whereas, in others, there is an upfront charge for the meter. So the change of meter will cause either an upfront charge of changing it or will change the meter rent on your bills.

Note: A change in connection from single-phase to three-phase will not increase energy charges on your electricity bill. So the number of units of electricity you consume will remain the same (because they depend on the wattage of your appliances and not on the electricity connection). 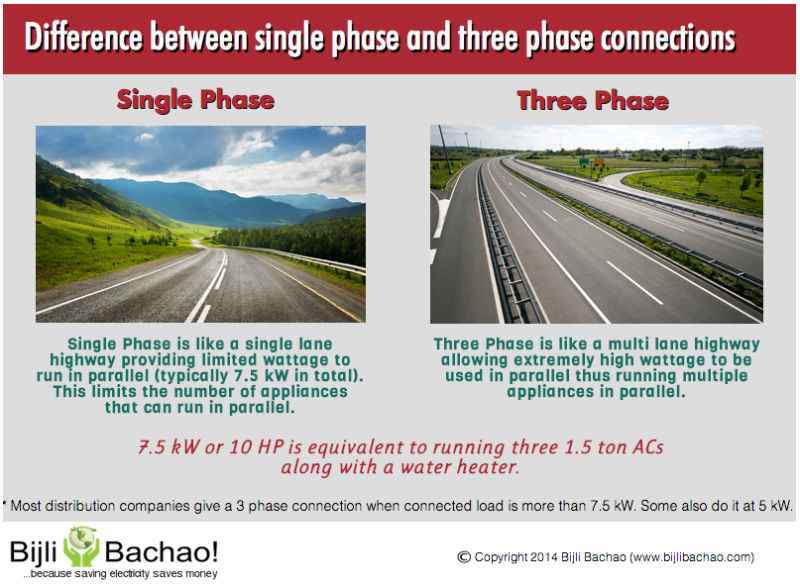